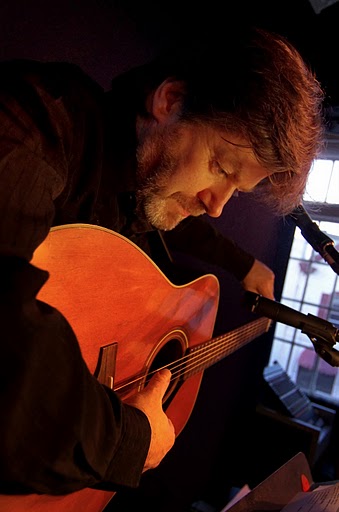 Patrick Egan hails from Co Tipperary, Ireland. He started singing at an early age and began playing guitar after receiving one from his neighbors as a gift. As luck would have it his teacher in National School — Phil Kelly — was a fine singer and guitar player, so along with three of his fellow students, Patrick asked him to teach him to play and sing.
After finishing school, Patrick discovered a thriving singing scene in his parish. It was there that he got to meet talented singers like Eamonn Long, John Norton, and Sylvie Stapelton. Eventually Patrick left for the big city — Dublin — where he discovered even more musicians. At O’Donohue’s pub, he got to hear great music and singers. Out of this came the first group he was part of called “The Min”. Soon music took over, and Patrick moved to Westport, County Mayo. He began playing with such musicians as Tom Doherty and Francis Lynn, and joining in on sessions seven nights a week. One of the bars he held a session in was Matt Molloy’s. Through this Pat got to play on many radio and TV shows and also sang on the famous recording “Live From Matt Molloy’s”  Patrick also played a tour with whistle player Olcan Masterson. They toured Europe and the United States and recorded an cassette tape called ” Westport Town”. Pat then went on to form the band “Sheeaun”with Tom Doherty, Kevin Hyde and Jorgen Fisher.
Patrick eventually moved to the United Stated and played regularly at McGurk’s famous music bar in St Louis. From this the band Chulrua — with Paddy O’Brien and Michael Cooney — was formed and for 12 years and three recordings they toured all over the United States. Patrick also taught at the many festivals giving guitar and singing workshops. The Catskills Irish Arts Week and Flatherty’s Irish Retreat are just two of the major festivals that he taught at during that time.
After St Louis, Pat lived in Iowa and played with former band mate Tim Britton. Then later, he moved on to Baltimore where he became part of the vibrant music scene and won a Master Teacher grant from Maryland State Arts Council to teach Irish singing.
Now living in Leesburg, Va., Patrick plays with many of the fine local musician  in the DC – Northern Virginia area. In 2014, he won a Wammy (Washington Area Music Association) for best Traditional/Singer.
Menu