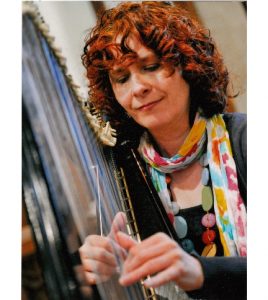 Máire is “the doyenne of Irish harpers” (SCOTLAND ON SUNDAY), Female Musician of the Year in the Live Ireland 2016 awards) and in the Chicago Irish American News Top TIR Awards and sole harpist recipient to date of Irish music’s most prestigious Award, Gradam Cheoil TG4 (Traditional Musician of the Year) – “for the excellence and pioneering force of her music, the remarkable growth she has brought to the music of the harp in Ireland and for the positive influence she has had on the young generation of harpers.” She is one of Ireland’s most influential traditional musicians, described by the late Derek Bell as “the most interesting and original player of the Irish harp today”. A multiple All-Ireland and Pan-Celtic winner, she developed profoundly influential techniques for harp performance of traditional Irish music, heard on her New-Strung Harp (1985)  – the very first harp album to concentrate on traditional Irish dance music, described by The Irish Examiner as “a masterpiece of virtuosity…  a mile-stone in Irish harp music” – and her many subsequent recordings. Her influence has been felt wherever in the world the Celtic harp is played – “a single-handed reinvention of the harp”. “Her work restores the harp to its true voice.” The Irish Times.  “Máire Ní Chathasaigh is in a class of her own” The Guardian Her “celebrated virtuoso partnership” (Daily Telegraph) with “one of the UK’s most staggering and influential acoustic guitarists” (fROOTS), has made seven duo albums, two quartet albums (with Nollaig Casey and Arty McGlynn) and toured in twenty-two countries worldwide to venues ranging from the tiniest of village halls and historic European churches to palaces in Kyoto and Istanbul, London’s Barbican, Sydney Town Hall and Cologne’s Philharmonie.