Born in Abbeyfeale, Co Limerick Louise is a well-established performer and tutor on both flute and uilleann pipes. Louise has 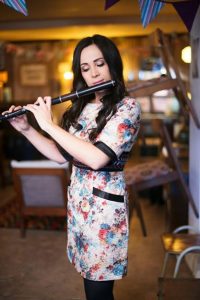 travelled extensively in both capacities, as both performer and teacher of the tradition, appearing at some of the biggest national and international music festivals throughout Asia, New Zealand, Australia, Europe, America and Canada. Louise released her highly acclaimed début solo album titled ‘Tuning the Road’ in 2014 to widespread critical acclaim, “A complete wonder of an album from a truly brilliant musician” – Bill Margeson. Alongside three album releases with father, Mick, and sister Michelle, Louise also appeared a number of years ago on Na Píobairí Uilleann’s compilation of young uilleann pipers entitled ‘A New Dawn’. Louise was voted Female Musician of the Year at the Live Ireland Awards in 2017 jointly with her sister Michelle. Louise also received the award in 2015 and 2005 and was awarded Tradconnect Album of the year for year in 2017 for the latest album release titled, ‘The Reel Note’, featuring Louise, her father Mick and sister Michelle. Louise has also won many All Ireland titles, including four Senior All Ireland titles on the same day at Fleadh Cheoil na hÉireann in 2001.

Louise is a regular contributor to music programmes, nationally and internationally, both on television and on radio and has also presented the traditional Irish Music series ‘Geantraí’ for the Irish language television station TG4. Louise has featured on the award winning series Port for BBC Alba and TG4, where she collaborated with traditional Scottish musicians on the trip. Louise also featured on the Uilleann Pipes UNESCO Heritage Bid short film submitted by the Department of Arts and Culture in 2016. On this video Louise presented spoken material and performed on the uilleann pipes. Louise is currently researching the history of women in uilleann piping and has lectured on this subject at many music festivals throughout 2018 and 2019. Louise graduated with her masters degree from Trinity College Dublin in 2016 and was awarded the 2016 Doctoral Fellowship in Irish Music Studies at NUI Galway.

“ Louise is one of the finest musicians of her generation”.  –  Matt Molloy.

“Mulcahy’s repertoire is as broad, welcoming and discerning as her instrumental virtuosity.”  –  Siobhán Long – The Irish Times