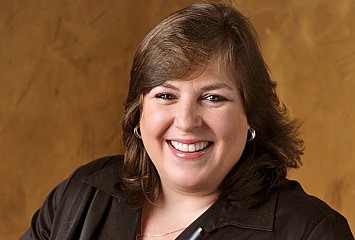 Joanie Madden is internationally recognized as one of the greatest musicians and most respected personalities in the history of Irish music in America.  She has dedicated her life to promoting Irish music, song and dance around the world, and is as equally successful as a musician and composer in her solo career while serving as founder and leader of the acclaimed traditional Irish music and dance ensemble, Cherish The Ladies.

Born in New York of Irish parents and raised in a musical household, Joanie is the second oldest of seven children.  Her mother Helen hails from Miltown Malbay, County Clare and her father Joe, an All-Ireland Champion accordion player was a native of Portumna, County Galway.  At a very early age, Joanie was exposed to the finest Irish traditional music listening to her father and his friends play music at family gatherings and social events.  She began taking lessons from legendary flutist and National Heritage Award winner Jack Coen, and within a few short years, she had achieved great success winning the world championship in Irish music on both the concert flute and tin whistle. During that time, Joanie also became the first American to win the coveted Senior All-Ireland Championship on the whistle.

Joanie is the top selling whistle player in history, having sold over 500,000 solo albums.  Throughout her musical career, she has amassed a plethora of awards and citations.  Her merits include being the youngest member inducted into both the Irish-American Musicians Hall of Fame and the Comhaltas Ceoltoiri Hall of Fame, she was chosen for the Wild Geese award, where she joined an impressive list of previous honorees, including: Pulitzer Prize-winning author Frank McCourt, Tony award winning playwright Brian Friel, Nobel prize laureate Seamus Heaney and Irish dance sensation, Michael Flatley.  She was twice voted as one of the Top 100 Irish-Americans in the United States by Irish-America Magazine and was also named Traditional Musician of the Year by the Irish Voice newspaper, all for her contributions to promoting and preserving Irish culture in the United States. In 2010, Joanie was forever immortalized on the streets of her native Bronx when a street was named after her on the Grand Concourse: “Joanie Madden and Cherish the Ladies”.  In 2011, she was bestowed one of the nation’s highest awards as she was chosen for the Ellis Island Medal of Honor, joining an illustrious list of distinguished American citizens, including six United States Presidents as well as Ambassadors, Senators, Congressmen and Supreme Court Justices, all singled out for their exemplary service to the United States.

She is equally loved for her outgoing personality and her stage persona and has been heralded by critics around the globe for her role as front woman for cherish the Ladies.  Noted folklorist, musician and scholar Dr. Mick Moloney calls Joanie, “A Character – one of the greatest you could meet in a long day’s travel” and bestowed on her the title “First Lady of Irish Music.