Immersed in the thriving music scene of the east coast US, Jesse began playing fiddle at a young age. He graduated from The Baltimore School for the Arts in 1995 and in ’98 moved to Ireland where h 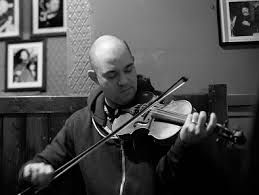 e joined up with the band Danu for a number of years, recording a CD which received ‘Best Group’ BBC Radio 2 award in 2001. His 2002 self-titled solo album was among the ‘top ten’ CDs cited by music columnist Earle Hitchner in America’s largest Irish weekly, ‘The Irish Echo’. He has since been involved in a number of collaborative projects including recordings with Harry Bradley, Colm Gannon, Emmett Gill, Mick O’Grady and Sean Gavin.  In 2007 and 2008, an Arts Council funded projecte nabled Jesse to reside in the refurbished two-hundred year old cottage of Irish Music flute legend John McKenna (1880-1947).

Much attention will be paid to the direct experience of listening to both live and recorded music.  The class will cover old fiddle and pipes tunes, starting from the cylinder era (circa 1900), observing stylistically appropriate ornamentation and bowing nuance.