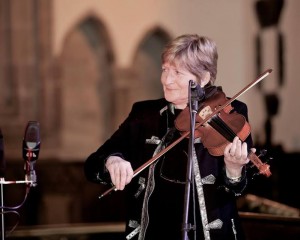 Eileen comes from a family background that is steeped in the Irish tradition. Her father Paddy was instrumental in establishing the B/C style of button accordion playing as we know it today. Paddy was also one of the most prolific composers of traditional music. Her mother’s family,the “Seery” family, Dublin, were also well known musicians. Her late mother Eileen Seery was a singer. Eileen’s grandfather, Jim Seery played fiddle and was a founding member of Comhaltas Ceoltoirí Eireann. Eileen’s uncle Sean Seery was a piper and played in the famous “Leo Rowsome Pipe Quartet” along with Leo Rowsome, Willie Clancy and Tommy Reck.

Eileen is an All-Ireland champion in both senior fiddle and senior fiddle slow airs. She is also a composer and some of her compositions have been recorded by well known artists including John Carty and Josephine Marsh. Eileen also has an interest in liturgical music and has composed music for two masses, “Aifreann Baile Nua” and “Drúcht ar m’Ainm”.

Eileen has been teaching music for all of her adult life. She worked for over twenty years as a music teacher at St. Mary’s Secondary School , Nenagh. Eileen has performed and given masterclasses and lectures at various seminars and music events in many countries, U.S.A, Europe, China, Russia, Australia and New Zealand. She is a highly respected teacher and has influenced many aspiring fiddle players. Eileen is a graduate of the University of Limerick having completed post-graduate study there. At present, Eileen works at the University of Limerick, teaching students undertaking both undergraduate and postgraduate music programmes.

Eileen is also a singer in the traditional ballad style.

Eileen has recorded three solo cd’s to date, “Newtown Bridge”1999, “The Fiddler’s Choice”2005, “Aon le hAon” 2012.Eileen has recently joined with Clare musicians Andrew MacNamara (accordion) and Geraldine Cotter (Piano and Whistle) to form “The Boruma Trio”. Their new album “Gléas” was released in July of 2014. She has produced two publications, “The Compositions of Paddy O’Brien” 1991 and “The Definitive Collection of the Music of Paddy O’Brien” 2009 both with J.D.C. Publications.

Fiddle Masterclass Content
Classes will focus on the development and improvement of technique, ornamentation, bowing, phrasing, development of aural skills.

Repertoire to be taught at masterclasses
The repertoire taught in the classes will focus on the repertoire handed down to me by my father Paddy O’Brien and my grandfather Dinny O’Brien. This repertoire is indicative of the North Tipperary musical playing style. I will teach old traditional tunes from my own local area and also surrounding musical district and also some of my late father’s compositions. The choice of repertoire selected by me for the classes will depend on the level of competency of the students attending the masterclasses. I will choose repertoire that I deem to be appropriate for the level of playing of the students in attendance. I will strive to give as much individual attention as is possible but will work with the students as a group. I will require all students to have a recording device with them at classes. I will teach all musical material by ear, (development of aural skills) but if required, I will give the music in notation or in ABC format if requested by the students at the end of class.

Slow Air Masterclass
Title: Bruach na Carraige Bána
This class will consist of the teaching of the beautiful air, “Bruach na Carraige Bána”. I learned this air from the singing of Séamus Begley from Co. Kerry. It is one of my favourite airs. I will be open to other instruments apart from fiddles attending this workshop.

Lecture on “The musical life of Paddy O’Brien 1922-1991”
Paddy O’Brien’s influence on Irish music as we know it today, rank him as one of the major influential musical figures of his generation. The lecture will focus on his family musical history. Paddy’s contribution as an artist, teacher and composer will be explored and discussed. The lecture will be illustrated with slides, video footage and audio recordings and the live performance of examples of his compositions.