Edel Fox is a concertina player from Miltown Malbay Co. Clare. She began playing at the a 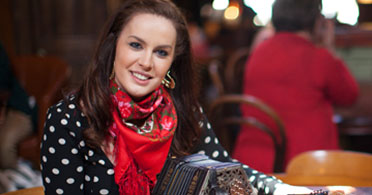 ge of 7 and was fortunate to be brought up in an area and environment where traditional music was in abundance. Edel learnt much of her music from expert concertina players such Noel Hill, Dymphna O’Sullivan, and Tim Collins.

In 2004, Edel was awarded the TG4 Gradam Ceoltóir Óg na Bliana (Young Musician of the Year) and since then she has travelled extensively as both a teacher and performer of the tradition appearing at some of the biggest national and international music festivals throughout the US, Canada, Europe and Asia.

Her popular 2010 solo recording “Chords and Beryls” has gone on to receive critical acclaim. She has appeared on numerous television and radio programmes on RTE, TG4, BBC and has also presented the popular TG4 music programme Geantraí (2010) and her self-produced and directed music programme Croch Suas É (2013).

Edel has a B.A. in Irish Music and Dance as well as a M.A. in Music Therapy. A fluent Irish speaker, she recently graduated with a H.Dip in Léiriú Téilifise (Television Production) from Waterford I.T. She is currently based in Waterford where she is in high demand as a music teacher.