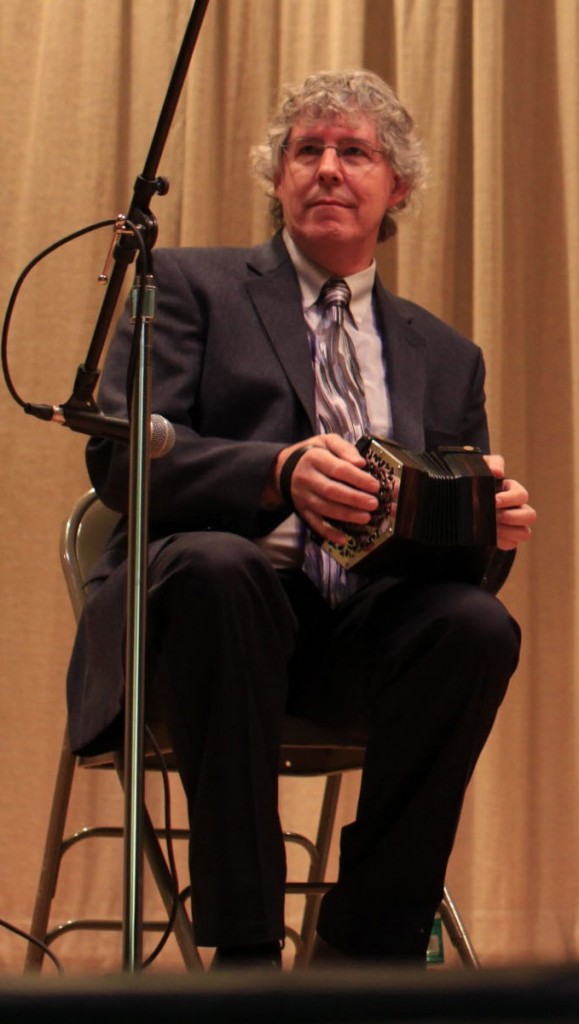 Douglas Barr has been an instrumental music teacher on Staten Island for the past 37 years.  He was the conductor of the Salute to Music Program for 33 years and has conducted several times in Carnegie Hall.  In 2010 Mr. Barr was honored by the Music Educators’ Association of New York City (MEANCY) for his longtime contributions to music education in NYC.

He has played the concertina extensively in the NY/NJ area for the past 15 years. He was the regular host of a session in the pub Slainte in Manhattan and has hosted sessions at the Landmark Inn in Manhattan, Saint James Gate, the Kilkenny House, and the Irish American Association of Northwest Jersey (IAANJ).   He hosted a session with flutist Linda Hickman on Staten Island at the Wild Goose Pub, and they are currently hosting another session on Staten Island at the Flagship Brewery.

He has recorded with the guitarist/harpist Iris Nevins and can be heard on her CD “Celtic Guitar Dreams” and “String Theory”.   He also hosted and recorded a live session CD at the Irish American Association of Northwest Jersey (IAANJ).

In 2010 Mr. Barr received a grant from The Council on the Arts & Humanities of Staten Island (COAHSI) to bring an Irish music session to Staten Island.  Mr. Barr was the curator and one of the performers in a very successful concert “An Evening of Irish Traditional Music, Song and Dance with Special guest Monsignor Charles Coen” on Staten Island in October 2010.  Mr. Barr was also involved with The National Endowment for the Arts to create a traveling exhibit of folklife on Staten Island.

In 2012 Mr. Barr was awarded a New York State Council of the Arts (NYSCA) Grant to study concertina with Monsignor Charles Coen.

Mr. Barr has been particularly influenced by the style and repertoire of Monsignor Coen. Other influences include Mary MacNamara, Claire Keville, Edel Fox and Caitlín Nic Gabhann.

Basic
The Basic class will be oriented toward beginners on the anglo concertina. It will be especially suited for those who can play a few notes and even a few tunes.  We will learn some simple tunes, review scales and ornamentation, and cover the basic fingering choices which are unique to the concertina and can sometimes be confusing to the beginner. Tunes will be taught by ear, standard notation and ABC will also be provided. If you need help learning to read music we will cover that too.  We will also be listening to selected recordings of the great players.  All ages are welcome. Bring your concertina and some kind of audio recorder.  Be ready to have some fun!

Stepping Stones
This is a great opportunity for the beginner adult and youth that have always wanted to get started or just try out the concertina.  This will be a no pressure, fun and easy going class.  We will cover holding the instrument, button layout and learn to play some simple tunes. Tunes will be taught by ear, standard notation and ABC will also be provided. No concertina? No problem! I have a limited number of concertinas available to rent for the week for a small fee.  Advance notice is required for a rental.  After you sign up for the class let me know if you would like to rent an instrument.  Doug Barr,  dbarr15@aol.com