A school teacher by profession Declan Forde has taught Art and Drama since 1979 in Northern Ireland. 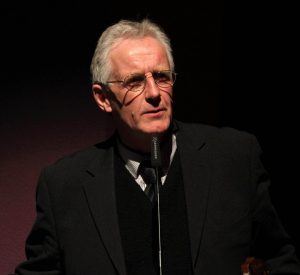 He writes, illustrates and has performed his original stories, songs and poems at Festivals all over Ireland including the Charles Macklin School in Donegal, the Fiddlers Green Festival in Rostrevor, the Carlton Summer School in Clogher, the Fiddlestone Festival in Fermanagh, the Ben Kiely Weekend in Tyrone, the Teachers Club, Dublin and the Bard of Armagh amongst others; he has also performed in the Irish Centre in London.

He has taught Creative Writing and Irish Art history in West Virginia as part of the famous Irish Week in Elkins and also in Pendleton, Oregon.

Declan has broadcast his work on RTE, BBC and Downtown Radio. He has presented a series on BBC Radio Foyle entitled Sweet Omey Town also A Sense of Place featuring the late Seamus Heaney and Tall Tales and Musical Notes, a look into the world of the Irish music session featuring Ben and Colum Sands and Mick Moloney.

Recently Declan has presented Art and the Great Hunger on BBC Radio Ulster, an analysis of the disparate ways visual artists have recorded and reflected the Great Irish Famine of the 1840s.

When performing his own work, which he calls ‘poems-with-chords’, Declan plays guitar to complement the words; he has also made a study of the evolution of the guitar in Irish traditional music.

County Tyrone is an area redolent with tradition and Forde’s work reflects this. His poems, songs and stories all emanate from the ceili-house tradition, when friends and neighbours would visit and spend an evening gathered around the hearth swapping local news and telling tales. His stories celebrate the life and times of the people from the Sperrin Mountains in Tyrone where he lives happy and content.

EVERY STONEY ACRE HAS IT’S STORY

For the late Nobel Laureate Seamus Heaney every stoney acre in Ireland has it’s story. How these stories are told shall be the focus of this class and over Catskills Irish Week we shall look at depictions of Ireland and the Irish in a variety of art forms.

From being eulogised as the land of heart’s desire to being dismissed as the old sow that eats her own farrow Ireland has inspired artists and writers for centuries. In this class Declan Forde will examine and investigate how creative people have represented, re-created and imagined Ireland: from stories around the hearth-fire to the page; from the canvas to the stage and the Silver Screen drawing on the works of, amongst others, such luminaries as Paul Henry, Jack B. Yeats, Sir John Lavery, Sean O’Casey, Brendan Behan, Micheal MacLiammoir, James Cagney, John Ford, Bing Crosby and W.F. Marshall.

Declan is from the County Tyrone in Northern Ireland and in this class he will also examine how artists and writers responded to the recent ‘Troubles’, including the phenomenon of Murals which provided visual art demarcation lines in those divided cities: Belfast and Derry.

He will also introduce you to the world of the Irish cottage and it’s place in the Irish psyche.