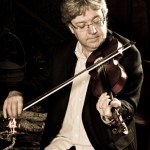 David Sheridan was born in Tubber, Co. Offaly, a small village that nestles close to the Westmeath border. A lifelong musician, David has been a constant presence in the top echelon of traditional fiddle playing. He compliments a hugely traditional fiddle-sound with an intense energy and humour in his playing and has attracted the attention of all of the flagship Irish television programmes. He has toured extensively at home abroad and in 2009 released a highly acclaimed CD, Faoi Bhláth with friends Ciaran Somers (flute) and Nicolas Quemener (guitar). David is now a resident of Carlow where, along with wife Michelle, he runs a successful folk club, bringing the best musicians and singers to the town.