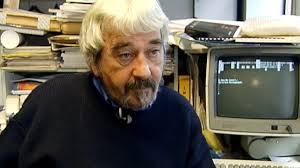 Do ye know that the longer I live -- and I am now happily assaulting my seventh decade -- the more I realise the fundamental truth that I am 97% the standard zany MacConnell Clan biological product and only 3% the individual named Cormac. You discover a lot about the depths of yourself when that truth breaks through. Hello to you. I'm an old and seasoned and happy hack currently based in the gentle West of Ireland and I'm delighted to be here. For what it is worth there are sobering facets attached to being the standard clan package. For example our family undertaker up in Fermanagh told me years ago that his firm shuddered when they heard of a death in our family. This was because we always die in a fierce foetal crouch, fists clenched, teeth gritted, fighting to the very end unlike our gentle Catholic neighbours, he said, who were so easy to coffin because they died stretched out straight as a die in their beds, hands joined on their breasts, serene smiles on their faces as if already glimpsing the front door of Heaven. Now I don't propose to trouble that undertaker's firm for at least another  twenty years because there are still thousands of yarns to be written and related, ballads to be written and sung in bars where the nights are lively, good whiskeys to be savoured, good friends yet  to meet and mingle with. So I am hugely anticipating this week's craic in the Catskills.

Here is an entertaining article about Cormac MacConnell, that originally appeared in the March 29, 2002 edition of The Hub, a New Jersey-based publication:

Cormac MacConnell, a columnist for the Irish Voice, shows his book, Cormac’s Corner, during his visit to the Dublin House in Red Bank on March 21.

RED BANK — St. Patrick’s Day, that annual celebration of things Irish, was less than two weeks ago. But for those seeking an additional dollop of blarney, as well as an added draught of the literati, they were able to get it by way of the words and voice of Irish writer Cormac MacConnell.

Cormac’s Corner is a collection of MacConnell’s columns written over the years for the Irish Voice, a weekly Irish-American newspaper.

These columns, usually witty, often poignant and melancholy, detail the life and times of those, like MacConnell, who live in the urban and rural sections of the western part of Ireland.

Among the selections MacConnell read were “The Cat Who Died for Ireland,” a humorous fable detailing a feline’s continual battle against pro-British Unionists; “The Queen That Got Away,” a tale concerning two beekeepers, one from the republic and another from the British-controlled north, who vie for a prized queen bee; “A Match Made in a Chapel,” detailing the eventual romantic coupling of a lonely horse trader and a middle-aged spinster from a neighboring village; “Paddy [London] at the Funeral,” a tale about an immigrant son returning to his native land for his mother’s funeral; and “A Fire Went Out of the Island,” a discourse on the affinity rural Irish people have for warming their homes with fires made from burning “turf,” a sort of aromatic peat.

“These are all true,” MacConnell said, with the corners of his eyes crinkling. “They may be a bit yarnish, but they’re all true, I promise.”

MacConnell also regaled the gathering of the approximately 50 people with songs he wrote, including “One Time Too Many,” which he dedicated to “all the ladies of the house”; and “Silent Night: Christmas in the Trenches 1915,” an antiwar anthem that has been recorded a number of times by various artists.

“Everything I produced in my life— this I am most proud of,” he said of that song.

Of his singing, however, “I apologize for a thousand nicotines,” he said.

MacConnell, 58, described himself as a “journeyman hack,” concerning his life as a writer.

“These were written to feed my family,” he said describing his Voice columns. “These were part of a day’s work.”

MacConnell started his career in journalism at the age of 16, first working for the now defunct Fermanagh Herald.

“I was stripped from the secondary school because I could write and spell, the only thing I could do,” he said.

Since then he has moved on to writing features, “colors,” he called his columns, for the Voice and Irish Emigrant.

He also has published a novel, Final Moments, and is currently the news director for Clare-FM, a radio station in County Clare, and hosts a public affairs program a couple of times a week.

MacConnell lives in the west of Ireland, in a town called New Market, County Clare, when he’s “not living at Shannon,” he said referring to Ireland’s national airport.

He would not live anywhere else, though he does travel quite a bit, he said.

MacConnell comes to America about four times a year, mostly to New York City. And this year, he was actually in New York for St. Patrick’s Day.

“I believe it’s a little overblown here. We’re much more restrained,” he said. “But I rejoice in the excess.”

“He writes about the Ireland people think disappeared,” is the way MacConnell’s work was described by Kevin Lynn, the proprietor of The Dublin House. Lynn, a retired English teacher, was born in Ireland and moved to America as a boy.

“It’s the Ireland I hope will be sustained,” Lynn said.