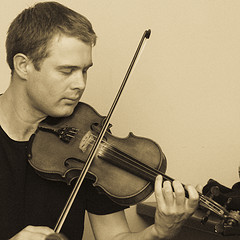 A former recipient of TG4 Young Musician of the Year, fiddle player Ciarán Ó Maonaigh hails from the Gaoth Dobhair gaeltacht in Co. Donegal. Growing up, he was heavily influenced by his extended family; his grandfather and teacher Francie Mooney, Altan members Mairéad Ní Mhaonaigh and Frankie Kennedy, Derry fiddle player Dermot McLaughlin as well as the Donegal fiddle legend John Doherty amongst others. Ciarán first album Ceol a’Ghleanna/The Music of the Glen was released in 2004. He is also a member of the band Fidil, and they have released three acclaimed albums. Fidil, released in June 2008, was described by Irish Music Magazine as “One of the most challenging and beautifully austere albums of the last fifty years”, Fidil 3 was released in 2009 and was awarded both a 5 star review and CD of the week in The Irish Times. In 2011 The OldWheel of Fortune was released with Songlines magazine declaring it “one of the finest albums to emerge from Ireland this decade.”
Class Description: Intermediate fiddle class
A wide range of Irish traditional tunes will be taught, from a selection of reels, jigs, slip jigs, hornpipes etc. We will have a look at the Donegal fiddle style, tunes, tune types and techniques that would be used in Donegal. I will gladly help with any technical difficulties and try to iron out any bad habits, for example; holding the instrument, posture, fingering etc., and answer any questions or concerns you may have. As the week progresses, we may work on features of traditional music such as ornamentation, chords and drones. The class will be taught by ear. Please bring along a recording device.
Menu