Christina Dolphin was born in County Dublin, Ireland. She took up the tin whistle at age 7 and went on to learn the flute a 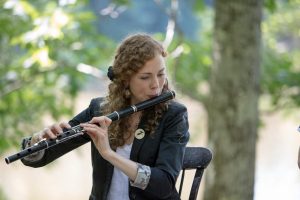 few years later. After studying at Trinity College Dublin, she went on to receive a master’s degree in ethnomusicology where she lectures occasionally on Irish traditional music. Over the past decade, she has toured extensively; performing and teaching in Ireland, the UK, America, Canada, Europe, China, Southeast Asia and New Zealand. She is a two-time All-Ireland champion, and also holds several other medals from various All-Ireland Fleadh Cheoil competitions. Christina currently lives in New York where teaches with the Irish Arts Center, and performs as a designated substitute musician with the Tony award-winning Broadway musical, Come From Away.