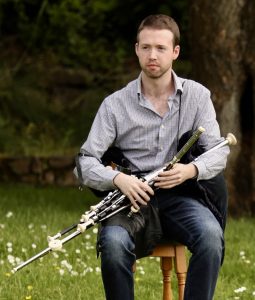 He started to learn the tin-whistle and uilleann pipes at an early age and is self-taught on flute and guitar. He
is greatly influenced by the many great traditional musicians and singers from his home area, as well as
numerous others he has met all over the country and abroad.
In 2006, as part of his school transition year project, he released an album entitled ‘Giorraíonn Beirt Bóthar’,
with a group of friends, local musicians and singers. It featured guest appearances from well-known local
artists including Liam Clancy, Áine U Cheallaigh, Donnchadh Gough and Ciarán Ó Gealbháin.
Since then, he has featured on a number of albums, as accompanist quite often, including on
Caitln Nic Gabhann’s album ‘Caitlín’, and Edel Fox and Neill Byrne’s ‘The Sunny Banks’. In 2013, he also
recorded an album ‘Lá ag Ól Uisce’ with his brother Seán and Tomás Ó Gealbháin, and is featured playing
pipes solo on ‘The Rolling Wave’, a compilation album issued by NPU.
Caoimhn was the 2012 recipient of the TG4 Young Musician of the Year award (Gradam Ceoil TG4).
In September 2013, he featured on a Music Network tour with Noel Hill and Liam O’Connor called
‘Bellows, Bridge & Bow’. In 2014, he joined the group Caladh Nua as guitar player with additional flute and
has toured extensively with them, and has performed on various instruments with other well-known groups
as well, such as Danú, Piper’s Union, and Skipper’s Alley. He recently recorded an album of flute and fiddle
music with fiddler Paddy Tutty from nearby Dungarvan.
A frequent teacher and performer, he has taught and performed solo and with groups all over Ireland, the US,
the UK, Europe, Newfoundland and New Zealand.
Caoimhin Ó Fearghail Class Description:
Class Descriptions – Caoimhín Ó Fearghail
Pipes Intermediate
In this class, through learning new tunes and revisiting more familiar ones, students
will discuss and learn about the ner points of chanter control, how articulation and
ornamentation are intertwined, and how they aect the rhythm and lilt of a tune.
Focus will be given also to tone and expression.
Dropped D guitar workshop
This class will learn about guitar techniques and chord progressions used by some of
the most traditional of guitar backers. They will learn how to accompany rhythmically
and harmonically; how to follow the tune and the melody players, and never to force
something on them or overpower them, always to compliment.
Students may also learn to play some tunes too with a plectrum if they wish.
Menu