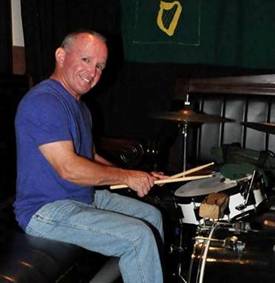 With a mother from Miltown Malbay, Co. Clare, and a father with Galway/Mayo roots and a love of traditional music, Brendan was destined to inherit the musical gene. At the age of five, his Dad began to take him to the Post Avenue (Westbury, NY) sessions, where Brendan was soon drumming out the beats on the backs of the chairs. He plays several other instruments, but it is the céilí drums that are his true musical love, and playing for dancers is Brendan’s passion. Brendan’s musical style was greatly influenced by the drummers of the Laichtín Naofa Céilí Band, Paddy and Martin Malone, as well as drummers from other County Clare bands. Brendan founded the popular Ceol na gCroí Céilí Band and also performs regularly with the Green Gates Céilí Band. He is well-known by dancers for the energy and lift he brings to the music.

Brendan is highly regarded as a music instructor and teaches both céilí drums and bodhran in the NYC area. His students have placed at both the Regional Fleadh and Fleadh Cheoil na hÉireann. He is widely respected by musicians and local music teachers alike for his knowledge of traditional music and bands. He is often called upon to help coach Groupa Cheoil and céilí bands in preparation for competition. Brendan is particularly dedicated to passing on his love of and passion for “the spirit of our music” by teaching and nurturing the next generation.